El Pitazo (Venezuela): Getting to know your audience and monetize your news products 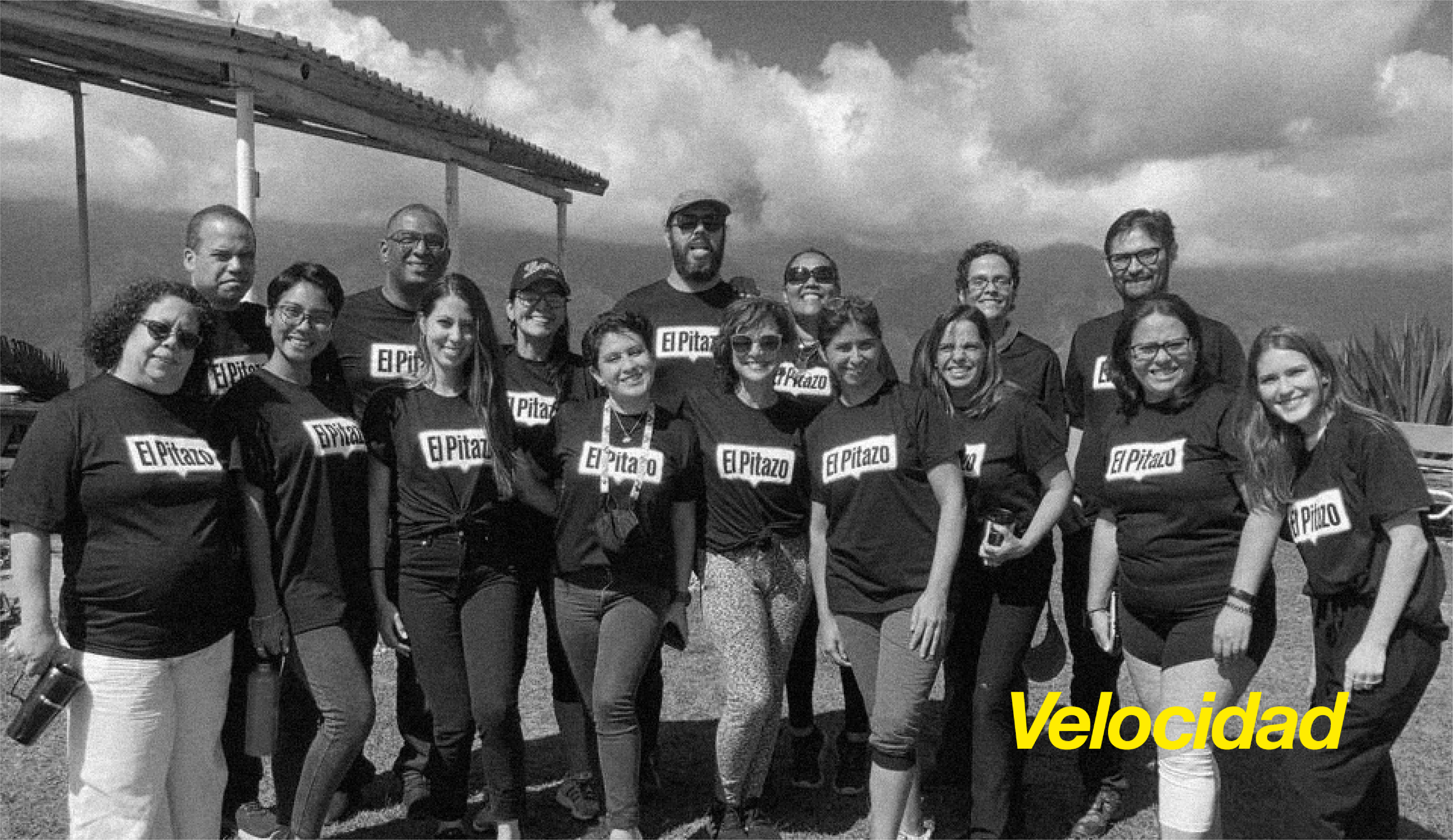 In 2014, El Pitazo was created to go beyond reporting on what happens in Caracas, Venezuela, which is often the focus for local and international press, and tell the stories of the interior of the country. In a short period of time, the El Pitazo team built a large network of correspondents and collaborators. Now, it is one of the few media outlets in the country with a presence across Venezuela. Operating with this resource-intensive business model depends almost exclusively on funds from multinational corporations or nongovernmental organizations. When El Pitazo joined the Velocidad media business accelerator, the team had a clear goal: to diversify their organization’s sources of income.

As they considered how best to diversify their income, the El Pitazo team first considered implementing a membership program. Having a membership system would allow the organization greater economic independence and guarantee the outlet’s future sustainability. However, considering Venezuela’s current institutional, social and economic crisis, a membership system was a complex endeavor. Just a few of the challenges the El Pitazo team knew they faced with implementing a membership program include: the substantial initial investment to get the program launched, the low income level of the local Venezuelan audience and the fact that membership is not a very common funding model in Venezuela.

During initial meetings with Velocidad accelerator consultants, the El Pitazo team discovered some key areas in which the team needed to work to further develop the organization’s business model. The most important topic they needed to focus on was deepening their understanding of the El Pitazo audience. Before developing a solid plan for revenue diversification, they needed to clearly define which of their readers they wanted to convert into “super allies,” meaning partners or members who support El Pitazo financially. The answer to this question came to the team quickly – they would focus on converting members of the Venezuelan diaspora into their “super allies.” Specifically, they decided to focus on Venezuelans who had managed to establish both their work and finances in other countries and who see El Pitazo as an outlet providing information and an emotional connection to Venezuela. With almost 6 million Venezuelan migrants living around the world, the objective was to capture the attention of Venezuelans who had settled in three affluent cities: Miami, Madrid and Bogotá.

Step one: Getting to know your audience

El Pitazo’s first steps in the Velocidad accelerator required an important internal restructuring for the media organization. Prior to Velocidad, 98% of the team worked on producing content, with only 2% focused on looking for funding and managing the organization’s finances. “One of the biggest impacts of Velocidad has been the creation of our sustainability department. The team has become increasingly diverse and is now made up of coordinators for monetization, membership, and marketing, as well as a newsletter editor and a designer,” explained Yelitza Linares, El Pitazo’s point person for business and partnerships, who led the organization’s participation in the Velocidad accelerator.

Working with tactical consultants specialized in metrics and audiences, the El Pitazo team conducted a series of surveys and studies to segment their audience and analyze how their readers interact with the organization’s content. An initial Google Analytics analysis revealed that 90% of their audience accessed the site from their cellphones and 45% did so from outside of Venezuela. Google News Initiative’s Audience Explorer dashboard allowed the team to segment users into three main groups: occasional, loyal and potentially loyal readers.

Occasional readers generate large volumes of traffic and drive revenue through programmatic advertising, but are unlikely to help sustain a membership program. Loyal readers, on the other hand, are a much smaller but more reliable group. An audience survey (answered by 853 people from the “loyal” and “potentially loyal” reader groups) helped the team to better understand what audience members think of El Pitazo, as well as the likelihood that they would become members. Out of the readers surveyed, 44% said they were willing to provide financial support and an additional 47.5% answered “maybe.”

Following conversations with Velocidad consultants, members of the El Pitazo team determined that they needed to strengthen their news products designed for Venezuelans living abroad. During this stage of the accelerator, working with Velocidad consultant Maite Fernández (an audience expert) was key, as it provided the El Pitazo team guidance to develop a market study in order to better understand the information needs of their loyal and potentially loyal readers.

After conducting 200 surveys and in-depth interviews, the El Pitazo team identified a target group: people who have been living abroad for some time, yet have emotional ties to Venezuela. This discovery led to a new challenge – designing news products specifically for this audience.

In July 2021, El Pitazo launched a newsletter called Guayabo. “Guayabo” is a word Venezuelans use to describe a feeling of nostalgia or homesickness. Since then, every Friday, journalist Mireya Tabuas, who has lived in Chile for seven years, shares photos and anecdotes of fellow Venezuelans who live abroad. She also shares stories about typical Venezuelan drinks and food and promotes discussions about the Venezuelan words most commonly used abroad. “Sometimes, the people who’ve left Venezuela don’t want to hear bad news about Venezuela, but they still have a family here. There are flavors, music, and all kinds of values that still connect them to Venezuela,” explained Linares.

The success of the newsletter, which currently boasts 2,200 subscribers, encouraged the El Pitazo team to organize a series of live virtual events, also called Guayabo, to promote the newsletter and reach new audiences. “We talked in real time about the same topics, but with famous people who are in the diaspora,” said Linares.

In addition to these specific initiatives, working on their audience with consultants had a noticeable impact within the organization. Internally, the team created a dedicated audience management department for El Pitazo, which now holds meetings that allow the team to analyze metrics and trends, as well as create El Pitazo’s personalized daily news agenda.

“When working with El Pitazo’s team, we focused on the viability of the organization’s new projects and how to monetize them. Concentrating on revenue streams was an important part of launching new journalism initiatives for their audience,” explained Nicolás Piccoli, a strategic consultant for El Pitazo during the second phase of Velocidad. “For example, the Guayabo newsletter was an innovative, high-quality project developed by the El Pitazo team. It was the organization’s first step toward connecting with a specific segment of their audience, a subset of their readership for which a relationship had yet to be defined. In addition, the Guayabo newsletter served as a minimum viable product (MVP) for the organization. The El Pitazo team was able to analyze the newsletter’s potential for monetization, and it added further journalistic value to El Pitazo’s highly regarded offerings,” he said.

From there, El Pitazo also developed other newsletters and Forochats (chat forums) as products that can be monetized in the future and, at the same time, can help further solidify the loyalty of local audiences to El Pitazo.

“Understanding our audience better has reaffirmed the direction we’re taking with the work we do, as well as helped us refine content as we develop it and make it as useful as possible,” explained César Batiz, director of El Pitazo.

As an example, at the beginning of the pandemic, the El Pitazo team launched a newsletter specifically on the coronavirus. They also started a weekly newsletter about “good news,” a welcome offering at a time of such crisis and negative news. El Pitazo staff also relaunched a culture-focused newsletter about consumption trends stemming from COVID-19 isolation and the lockdown. To try and get around the limited internet access that El Pitazo’s audience deals with, as well as the near-constant blocking of the El Pitazo domain name and website in Venezuela, the team also shares newsletters, such as “Contamos Victorias” (“Sharing Victories”) and “Guía de Casa,” (“Household Guidebook”) on WhatsApp and Telegram.

In order to further relationships with local audiences and foster support for a membership program, the El Pitazo team also created the Infociudadanos (InfoCitizens) Participation Council. This group is composed of 13 trained volunteers who take part in sharing useful El Pitazo content with fellow members of the public, as well as developing strategies for how best to distribute this information.

In order to launch these new products, it was essential for the team to act on lessons learned during their time working with product consultant Ezequiel Apezteguía. “We built from a solid understanding of the three pillars of product: user experience, business and technology. Using that matrix, the El Pitazo team was able to evaluate and navigate challenges as they arose,” explained Apesteguía.

Working with Apesteguía, the team learned to approach projects by thinking about the time and effort they require and their potential impact. Thinking with this mindset help bring about a cultural shift within the newsroom, that involved thinking small, experimenting, measuring success and then scaling up to a larger project. “Less effort, more impact” became the El Pitazo team’s mantra.

Now, the team’s approach to developing and refining products goes beyond thinking solely about products from the viewpoint of the newsroom. Instead, El Pitazo’s strategy factors in the resources needed, whether those be human, technological or financial. The team also contemplates what contribution these products can make to help expand the organization’s audience and increase loyal readers, as well as how the product in question can help diversify the organization’s funding sources.

Although El Pitazo is a digital native media outlet, the team behind it has prioritized developing content through face-to-face interaction since the company’s inception. In different parts of Venezuela, El Pitazo staff have organized workshops and movie screenings, even projecting news on giant screens after baseball games. One of their more noteworthy events was the Café con El Pitazo (Coffee with El Pitazo), an event during which an expert talks with community members about issues of general interest and ways to collaborate in problem solving.

When the pandemic hit, the isolation that followed forced the El Pitazo team to develop new ways to reach their audiences. Velocidad’s consultants accompanied the team through this transformative process. The in-person “Cafés” evolved into Forochats, weekly virtual meetings held on WhatsApp to discuss topics including corruption, elections, sex crimes and fuel shortages, among others. On average, there were between 200 and 257 attendees, which is the maximum number of participants allowed in one WhatsApp group.

The Forochats contributed significantly to audience loyalty and increased traffic to the El Pitazo site. In August 2020, the Gabo Foundation highlighted these Forochats as part of their Innovation Lab.

The El Pitazo team accomplished the objectives they established at the beginning of the Velocidad program. In just over a year, they doubled the number of unique users and page views. In September 2021, according to data from El Pitazo’s audience and digital marketing departments, El Pitazo achieved 88.39% more users and 84.18% more visits than in September 2020.

Toward the end of the accelerator, the El Pitazo team was able to launch a membership program and redesigned the organization’s payment system, simplifying it and optimizing it for mobile users.

Moving forward, the greatest challenge for the El Pitazo team is to continue growing and retaining the El Pitazo audience living in the diaspora. Even more importantly, it will be critical to convince this audience that it is important to support quality, independent journalism. While challenging at times, this goal is a promising opportunity for the team, as Venezuela continues to be a country attracting worldwide attention. El Pitazo’s content is of interest to the international community as a whole, especially to the thousands of Venezuelans in the diaspora.